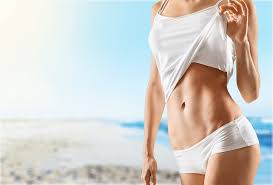 Abdominoplasty or tummy tuck makes the abdomen flat, by removing excess skin and fat, while strengthening the abdominal walls. The main incision of abdominoplasty is above pube (similar to caesarean) and is designed so that it is not visible by wearing underwear or swimsuit.

The duration of abdominoplasty is about 2-4 hours, it is used general anesthesia and hospitalization lasts for a maximum of one day. The procedure is almost painless, with a fast recovery and a short return to work (at most 10 days), while in full activity in 4-5 weeks. In the first week light walking is allowed, while intense exercise (abdominal exercises) after the fifth week. Most importantly, no drain is usually necessary, but in the postoperative period it is considered necessary the use of an elastic band. The final form of scarring is appeared in 3-10 months. The cost of abdominoplasty depends on the size of the problem, as well as the technique to be selected (for example combination with liposuction), but it is certain that individuals submitted to it will receive it in safety and aesthetic result.

The results of abdominoplasty are permanent, unless there is a significant increase in body weight or new pregnancy.

Abdominoplasty is often combined with breast augmentation, breast lift or the surgery against gynecomastia, succeeding a total makeover.